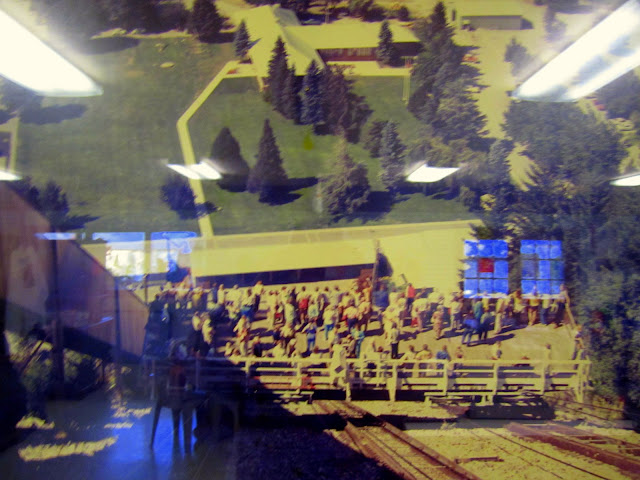 I saw this shot and instantly remembered riding this as a kid. I was like four or five at the time.

My father came over to see what I was looking at and upon recognizing it, he began talking about a hunting trip he'd taken with his buddy Karl Hoff. They'd ridden this tram up to the reservoir, eventually taking the tug and barge across Ross Lake, and after disembarking they hiked up above treeline where they made camp. Their goal was to bag a Mountain Goat or Dahl Sheep, with a good rack of horns. In the morning, when they awoke, as the two Elmer Fudd's looked out their tent flaps, they realized overnight it had snowed 6 inches.

Did I mention it was still late summer?

And while the terrain was great for goats and sheep, the new snow pack became a treacherous, no match deal for Karl and my father as they took up hunting rifles and proceeded to slide all over the peaks. In the end, both men returned home with no goat or sheep for either of them--although on a later hunting trip, Karl did finally get his goat.

It's funny, as my father talked about their adventures, the memory this spawned. I can also now see that amazing white mount, at the foot of their dining room table, a big brute of animal, he with those giant horns and long tufts of hair.

Many years in the future, on my own backpacking trips, I would awake to find goats right outside my tent. I still think of Karl and now my father, every time I see one.

As a child, I began to embrace an instinctive sense that the wilderness was my true home. A couple years after riding the tram up into North Cascades National Park, it would be Karl and his wife Verona that accompanied my family on my first back packing trip deep into the Alpine Lakes Wilderness Area. I suppose this happened when I was 7 years old. My mom did not know she was preggo with my sis Kellie at the time...and it is no small feat to hike up that butt puckering series of switchbacks when you're not preggo...and she still reminds my father of this feat every chance she gets.

That part of the Alpine Lakes has always held my respect. I've returned several times since I was a child and on one such hike brought my boyfriend. It almost broke us up. With me all about the endurance and pushing the pain as far out of my mind as possible, and even as the exertion nearly killed my boyfriend-especially when he realized I'd put a six pack of cola in his pack (I had nearly everything else). We would discover as we froze our ass off that night that sleeping in the same sleeping bag was not nearly as practical or warm as we'd originally imagined it would be.

I can not imagine not having an addiction to the high country, the serenity of stillness, the sound of geese taking flight...and the calving of glaciers. These are the symphonies that have inspired my writing, kept me sane through great upheaval, and that remain the most beautiful welcome mat celebrating place, homecoming, and beauty. And to think it all began with a tram ride!