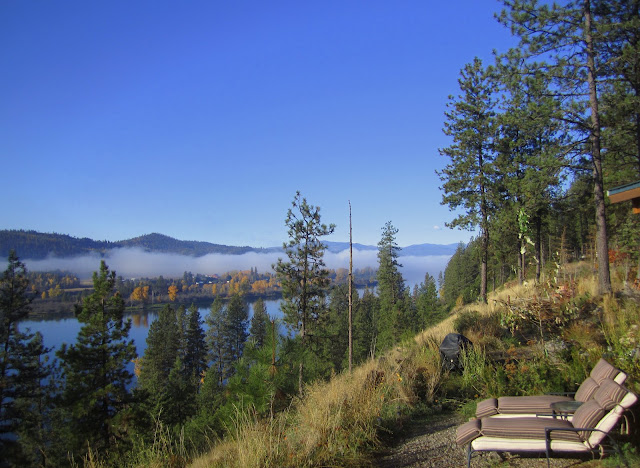 I don't have a clue how many shots I've taken over the years from this, the same vantage point.

I wonder sometimes if there is a point to this practise. Am I shooting pointlessly aimed pictures for nothing, even as I stumble around on a steep slope, capturing the same images over and over again?

But are they the same. Really?

The light will change. As so will, slowly over time, vegetation. The sky, cloud, seasons, are always in transition.

But what is the point?

I wonder what my friend Elliot would think. He a rez cop in Eastern Montana, he who is also endlessly shooting sky, the seasons, and the bigness of the universe.

Then the skeptic returns.

Does anyone in England or South Africa really need to see the same views over and over again?

I've learned in my Master's program that rhetorical questions are a bit taxing, that they mostly fail as a literary devise and in an epic sense, the use of such gimmicks by authors is quite lazy.

Yet the questions, however lazy they are, seem quite real to me and I don't really know what I am doing taking all these pictures with a simple, anti shaking enhanced point and shoot digi camera.

I wonder, as people tune in, readers that I might never meet-- do they ask, "Mountains? Again? Doesn't this guy have a life?"

Do they wonder, "wait, where is the nudity? The sex? Or the exposition--the essay on the value of Hot Wheels, Hot Guys, and being not so, uh... Holy?"

Instead it's more of the same they find. Bull Pines, the occasional Bull Moose, and all this natural beauty.

But as I sit here thinking about this I look outside and the light is already changing, and I am reaching for the camera, to point.

You certainly don't wasted your time!