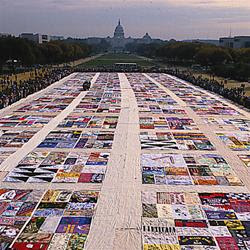 In the beginning, this quilt was all there was (at least it seemed at the time) to capture the public's attention.

Now, if a public presentation showcasing the entire quilt were to occur, the quilt would be hard pressed to find a space, any space, large enough to display the ruin left in the wake of a single virus.  Maybe a county in Kansas could volunteer.

No one talks about HIV anymore.

On December 1st Showtime will present a documentary on the Washington DC area---and how it is among the most infected locations on the planet. Yet the virus marches on, far beyond the beltway. In Missoula, Montana the testing agency responsible for administering most HIV tests reported that last year new infections quadrupled. A significant number of those testing HIV Positive never returned to get their results.

My doctor, Rob Killian, whose blog is featured on the left side bar, told me in August that in his practise, this year new HIV infections are up 15 times where they were at this time last year.

New infections are also up here in Eastern Washington.

I don't buy any of the numbers coming out of the CDC. Indeed I heard a report in which Surgeon General Koop, the lead medical officer in charge during the Reagon administration warn we are heading for round two of a disaster that we can't even begin to fathom.  Yes there are meds.  But how many people's meds will society be willing to subsidize or pay for? Especially with the budget in the mess it is, and with the Republicans about to resume control of the budget process, does anyone expect support for current funding, much less additional increases?  Yet one tool to limit new infections is making sure that HIV positive folks have access to meds that will lower their viral count, to fund prevention campaigns, and to ensure that people know their HIV status.  With the Republican's back in charge, just who is going to support wide spread availability of access to these meds?

I mean, really, are we putting any faith in the Republicans?