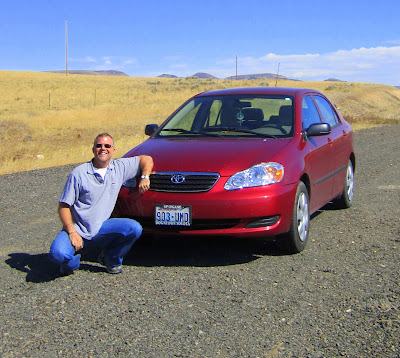 Never underestimate the power of an 89 year old woman's Toyota.

I think I mentioned that I performed the burial service for my friend Wes in May. His wife Ellen, a year younger than Wes began to experience some fairly serious health challenges about that time. Then the day we shot this picture, she suffered a horrible stroke. Tom had picked some flowers from my yard in her honor, and they'd ridden with us on the dash. Tom can be pretty hard on himself but small gestures like this show that despite the tough exterior, a sensitive and empathetic person is standing by to contribute to a better world.

It's a big difficult to clean out a person's car---one who you know has lived an amazing life but who will never drive again, and who is in rapidly failing health. Over the summer, we'd parked the car up at my place while we waited to see if Ellen would rally. When it became obvious that she would not, I'd told Tom about the car and he'd offered to purchase it. The vehicle had almost no brakes left, 108 k miles, and a golden corral napkin had somehow plugged the ac filter.

Yet still, Ellen's car took good care of us and as we took the most direct route out of the Selkirks toward Bullhead City, AZ where Tom would drop me off, I felt like Wes and Ellen were there with us in spirit. Wes was shoeing horses almost until he turned 90, and the two of them loved the west, the wide open country, and the ranching lifestyle.

It's really been a tough few years as we've lost so many incredible people up here---the kind of men and now women that seem in short supply. To me, I'm so lucky to have known them---and well, it wouldn't be an overstatement to acknowledge that in these folks I've met a few hero's and they forever changed my life. It seemed important, that in cleaning out Ellen's vehicle in preparation for it's sale that its final journey out of Washington be one that might honor it's former owner.

I believe that we did honor them. I hope that as time passes those of us that remain will strive to honor their memory, in our hearts and in our conduct with one another. Like that verse in Phillipians...Whatever is honorable, true, and just....