Reflections on the hot mess that is "The Company of Men"

I always find it both humorous and disappointing when I encounter these sorts of "discoveries of Masculinity", just as I once found it ridiculous when Michelangelo Signorile claimed to have discovered that the gay community existed far outside the traditional gayberhoods. You know, by his “risky” decision to travel from the safety of NYC to an Iowa college town (and then chronicle his expedition to this so-called gay frontier in his book Life Outside).

So today, to read this quote attributed to the promotion of The Company of Men is a bit unsettling, if not entirely predictable:

"...Taken as a group, they represent his ideal, a surprising new vision of male beauty that is quietly subversive and powerful. Most importantly, Little’s images shatter mainstream stereotypes of homosexuality and underscores that masculinity lies beyond sexuality." 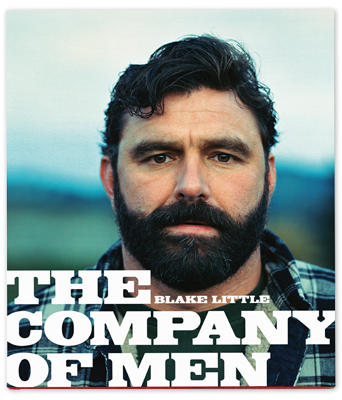 And what is truly "new" about any of this? I can attest from being working class all my life that masculine ( and yes effeminate) gay guys populate nearly every corner and profession in the nation. So what are we really celebrating here? Oh yeah the same old same old. The value found in a lucky strike of DNA and a good mug shot.

"We" are hardly part of a "new" movement. There is a shit load of us that pursued our passions regardless of safety, conformity, and convenience and we’ve done so, from our hometowns, all our lives. I find it incredulous that Daddyhunt falls prey to this code talk. I. E. that these guys somehow represent the ideal of "real men". A guy's looks have just a fraction to do with the complete package of what makes a guy worth knowing. So really, this is just about marketing, packaging, and our reduction into one dimensional fantasy stuff while also pushing this tired sense that somewhere over the rainbow there is a guy out there that is better than you, who is part of a secret society you’ll never get an invite to.

If Masculinity truly lies beyond sexuality, the fact that all these guys are gay wouldn’t matter. Yeah they are gorgeous and independent. The photographer, when he wasn’t contributing to the poison of celebrity egos, seems to have found highly photogenic men who can chart their own course. Yet, that's not what is sickening about the collection. Rather it is the hype he used to sell this crap that only just reinforces tired assumptions.

First, newsflash. Anyone with a dick is, by definition, a "real" man. The company of men seems hell bent on fencing guys into very particular options. One particular handsome, very masculine guy I know, who is a metal-fab, paint shop specialist, a guy who works on the dam gates for hydroelectric projects in the Northwest, is about to hike the Pacific Crest Trail in 26 wedding gowns. (http://www.hiking26.com/  )

Would he be part of the ideal, because he’s got the balls to hike 2600 miles in a bunch of donated wedding gowns? Or would his choice of hiking attire just ruin everything for this photographer? I suspect the contradiction represented by a hairy guy in a dress would ruffle feathers, just as the trucker who does drag or the long shoreman who collects Barbies.

There is an agenda at work here and I am calling it B. S. Just because some LA celebrity photographer suddenly steps away from the urban, pop-culture, upwardly mobile, crass consumption based identity of HGTV land and realizes that, like OMG!, there's "real" men out there, is certainly not worthy of all the school girl-like behavior I've just witnessed on Daddyhunt. (And apologies are gladly offered to any school girls who might be offended by the cliched reference.)

A Company of Men is little more than the same old classism, the same rush to reduce people into rough trade and the result is pure objectification. This fawning all over the clichéd "breaking news" that not every gay guy gives a rat's ass about fashion, the club scene, or moving to Miami/LA/Atlanta/SF, is hardly earth shattering. It’s just another version of the chorus heard relentlessly on gay dating sites, despairing over the lack of "real" men out there.

Promoting the idea that there is this exclusive, almost secret club of gay guys, a hidden butch society only discovered as a result of internet connections, and one that functions as if they are some sort of gay illuminati, is pathetic. If the gay press, whatever's left of it, was not so focused on selling trendy fashion, cologne, and "product", none of this would be unusual or newsworthy. We are far less open-minded than we appear if we can't acknowledge these stories are far more commonplace than we're given credit.

The real story here is the continued blindsided coverage, the typical stereotypical LOGO programming, and the assumptions our own media heads continually make about our community and what our interests are. The only "new" revelation is not our existence, but rather what took so long to finally truly embrace the real diversity of our community?

Instead this sort of urban driven A-List pandering is more about people who don't get out much and who still cling to tired notions of what being gay truly means. The Company of Men is an offering decades late to the party, and hardly represents a positive recent development. We've been Out in the middle of nowhere a long damn time. It's just too bad that our media is finally, just now, getting a clue about our existence.